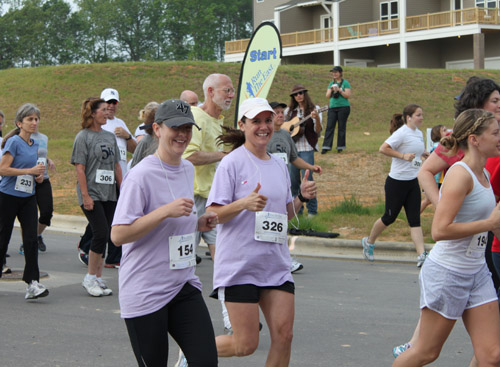 I confess, as pumped as I was Friday night about the race – I was equally nervous Saturday morning. The nerves seemed to disappear once we arrived at Briar Chapel. I left my husband & son as I searched out registration. I joked with Allison that this is the first “modern technology” race I’ve ever been to. My dad ran for years and, back in those days, the race officials pulled the bottom part of your bib off after you crossed the line. This time, I had to figure out how to attach a chip to my shoe so the computer would automatically grab my time as I crossed the finish line.

After everything was settled, I gave another “see you in a bit!” to Trent and D who were hanging out with Allison’s husband & sons as well as our blogging partner, Katie, cheering us on. Then Allison and I joined the group of runners assembled at the starting line. We were about midway back, chatting and listening to the starting info then suddenly, the entire group began to move forward. It was interesting watching the sea of motion around us as some runners started fast and others (myself included!) a bit slower.

Determined to keep our pace and retain energy to carry us through, we started off slowly and chuckled a bit as some of the runners pushing little ones in jogging strollers passed us! Kudos to those folks. It was hard enough pushing D during my training, but no way on the hills in that race course.

Just before mile marker 1, Allison picked up speed and got ahead. I felt like I had a good pace going where I was and my asthma was giving me a little trouble so I stayed back. I kept moving though. The sun came out just after this which was a disappointment. Although a fairly cool morning, the temperature difference when the sun hits you after running a mile and you’re moving uphill – not pleasant! I was wishing for more clouds! 🙂

The toughest parts of the race were definitely the hills. Allison put it best afterward when she said it wasn’t so much that they were steep, but that they were long and just kept going. My training had been outdoors on a greenway. It’s not flat, but definitely did not have inclines comparable to the course. These proved tricky for me and my lungs so I slowed it down.

As I rounded the final turn and saw the finish line ahead, my family and heard the cheering – my old high school running days hit me and I kicked up my speed. I pushed myself with all the energy I had left to make it to that line. My official time 32:57. I was a little disappointed hoping to come in closer to 30 minutes, but at the same time, proud of my accomplishment. I spent 16 weeks training to get to this point. At the start of which, I could only run for a few minutes at a time. The hills got the best of me, but truthfully, not that bad. I did it. I achieved my goal – completing a 5k.

I haven’t officially decided what’s next. I do feel like the last few weeks have shown me that I’m not a runner anymore. My joints, especially the knee I had operated on, just aren’t the same and it’s clear that my asthma is definitely a factor. I do plan to continue working out. I may even continue to use the Ease into 5K app. I like the earlier weeks with the interval training. Beyond that, I’m undecided. Whatever it is, I’m confident now that if I approach it like I did this challenge, I’ll conquer it as well. 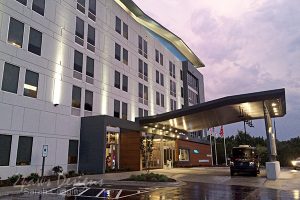