Our son has definitely had a love for cars (specifically Disney-Pixar Cars) for the last year. I joke my mom started it with the Lightning McQueen walk/ride toy she gave him for his first birthday. Maybe it was the light-up Lightning McQueen shoes Trent picked out for him in December. Or maybe just that boys & cars go hand-in-hand? Regardless the reason, my child loves all things Cars. Thus, it was pretty obvious the theme for his 2nd birthday party should be Cars. In early June I mailed out “save the date” style postcards to his friends. Found the idea here and thought it was too cute. Who doesn’t love mail? Dylan gets excited about ours and rarely has a piece addressed to him so I thought his friends might find it fun to get a little something. For the front, I used an image I found on Flickr. The back had a note from Lightning McQueen stating to save the date of July 16th for the party.

The following week, I sent out the official invites. I came up with the idea in Photoshop but wanted a bit more depth so the final invites were a hybrid design. I created the background black/white checkered paper and printed it out to 5×7. The section with the info was made in Photoshop and printed on 4×6 photo paper. I used the same Lightning McQueen clip art on the invite & return address labels. This party was for his playgroup friends & their families so we chose to start at 10am. Early enough to beat the July heat and enjoy the backyard – plus wear out the kids for afternoon naps. Bean bags to toss into a tire … plus his two toy push mowers (amazing how toddlers love those!), small Cars coloring sheets to color (last minute addition as Dylan wanted to do that waiting for his party to start) and we played a little “Ramone’s Body Art” getting temporary tattoos.

For decoration in the yard, I hung the birthday banner and road signs that I made as well as a couple of old records with the centers spray painted silver to look like tires & hubcaps. Against our house, we had a real hubcap and a subway art print I created: Inside, I set up our kitchen as “Flo’s V8 Cafe” and split the food & drinks into two locations. The drinks were at the bar area and I put together this fun display using a plush Lightning McQueen toy, gas pump (idea from Disney Family.com) and can of “Dinoco” oil I made from one of our niece’s empty formula containers: The adults had red party cups and each of the toddlers got their own Take ‘n Toss Cars cup to use & take home. Before the party, I printed a label with each name to mark the kids’ cups to help keep them straight. The food area was designated with our “Flo’s V8 Cafe” menu. I created the logo in Photoshop using online images as examples. Each of the foods were given a fun name. The place setting at the bottom is from Sara Schmutz‘s Summer Picnic Embellishments. I used glue dots to adhere the menu to a record and set Dylan’s little metal Lightning McQueen lunch box in front: To eat, we had Perdue Chicken Nuggets (in Cars shapes, of course!), cheese cubes, and Chicken Minis & Fresh Fruit from Chick-fil-a:

Followed by “Piston Cup-cakes” for dessert (oh yes, I had to go that cheesy! LOL). I made the cupcakes myself and used Cars baking cups and cupcake picks by Wilton. For cake time, we had the 6 toddlers seated at a small picnic table in the backyard. I have to say, I’ve never been more impressed! As badly as they all wanted the cupcakes throughout the morning, they sat so nicely and just looked while we sang happy birthday and Dylan blew out the candles.

On their way out, each of our son’s friends grabbed a party favor bag: The favors were wrapped in brown sandwich bags and sealed with labels I created in Photoshop. I used the same checkered flag border I made for the invitations. Each had a child’s name on it followed by a thank you from Dylan. Inside was a pullback Cars toy from the Disney Store, coloring sheets and a small bag of M&M’s.

It wasn’t until the party was winding down that I thought to get someone to take a family photo (I was enjoying the fun too much!) … Dylan had a great time despite his lack of a smile here. He was tired & a bit displeased we pulled him away from the fun for a moment to take a photo. It was all we could do to get him to look at the camera. 😉 His shirt was my final party “decoration.” I followed this tutorial and finished it off with a fun red zig-zig stitch around the edges using my sewing machine. 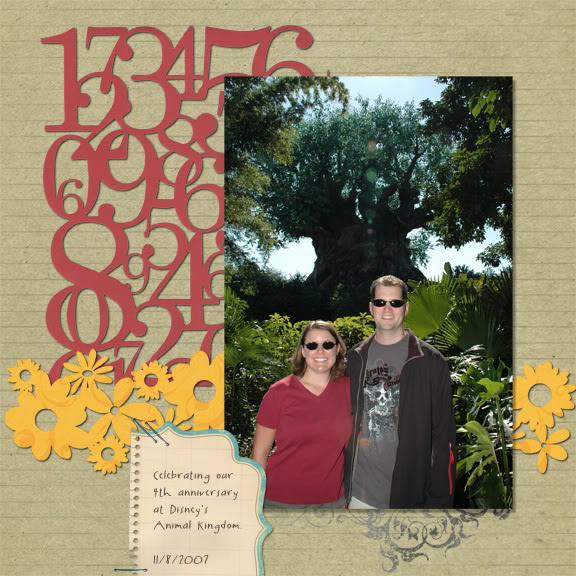 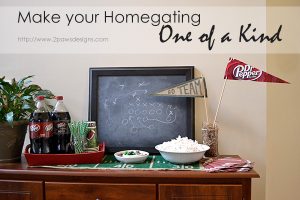 Make your Homegating One of a Kind