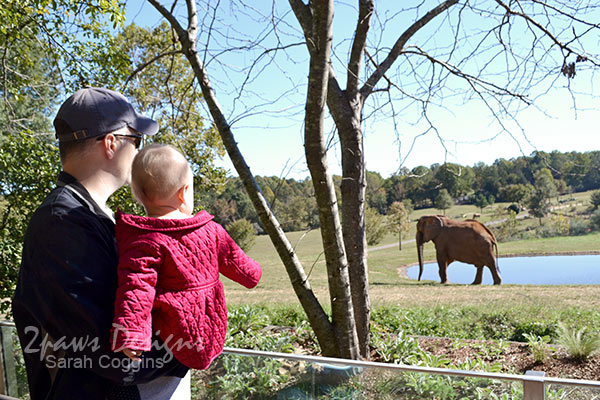 Our baby girl turned one over the weekend. One. I knew it would happen, but still – those 12 months flew by. On Saturday, we celebrated with a family trip to the NC Zoo in Asheboro. This was her 3rd visit, but the most recent was last January at 3 months old, so she was much more aware of her surroundings and the animals to say the least. We tend to visit in the “off season” and therefore typically have to enter via the North America entrance. Since the Africa entrance hasn’t closed yet for the year, we decided to start on that side of the zoo which meant our first sights were the giraffes, zebras, ostriches, and elephants. She really loved the elephants since they were so close to us.

And making funny faces with Granpda. Perfect entertainment while waiting on her brother. With his new reading skill, he was checking out a lot of the information plaques. Great for him, but not as exciting for a one year old to wait on. Batology 101 was taking place around the Desert exhibit. My son loved it. He learned a bit plus played a game, did a couple of crafts, and got to see how his wingspan compared. We also purchased tickets for the special Dino World exhibit. It’s pretty much the same (or similar) to one a few years back. My son loved it then and loved it again this weekend. His sister was okay at the beginning … Sitting on top of a fake dinosaur with your brother? Not too bad. But actually getting close to a few animatronic dinosaurs? Not a good idea. And this was the beginning of the exhibit. (See one of the dinos in action on my instagram account here)

We started hurrying through and about halfway (really only like 20 feet further), I took her and strapped her to me in the LílléBaby carrier with the neck support & hood up to hide her from seeing any more of the dinosaurs. When we reached the end, I opened it back up and reassured her they were “all done” including signing it. She still wasn’t fully convinced as you can see by the one “good” photo of the two of us all day. Of course I forgot to get a photo with her until she had been scared by dinosaurs. *sigh* We’re assuming she’s over it though because yesterday we found her playing with some of her brother’s toy dinosaurs. Apparently they aren’t as frightening. Fortunately, we had a few more animals to view before leaving the zoo including the lemurs, chimpanzees, and the lions. All 5 lions were napping together when we first approached. Then one decided to strut to the rock and pose. One of those moments where I kicked myself for forgetting my other lens! Oh well. I still got a couple of decent photos and our birthday girl squealed with delight at seeing the “big cats.” The scary dinosaurs were completely forgotten and we had one happy girl on our way to the exit. Did you catch the one big birthday item that was missing from our day? Her brother was quite disappointed that we didn’t have a cake! It was a bit much to take with us to the zoo though so we saved it for yesterday. As most one year olds (maybe all one year olds?), she wasn’t sure what all of the fuss was about, but did seem to enjoy watching the candle flame and being sung to. Her brother blew out the candle for her. Then I cut her a small slice and she surprised us by eating a few bites. She’s not as big of an eater as her brother was at the same age and finds mealtime much more enjoyable when she’s tossing food. Needless to say we did end up with a bit of icing on the window beside her. But hey, it was her party so why not toss some cake?

Cake banner was made using my Silhouette Portrait and How ‘Bout Them Apples digital kit by Mommyish. This post contains affiliate links and I will be compensated if you make a purchase after clicking on my links. 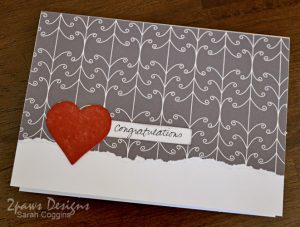