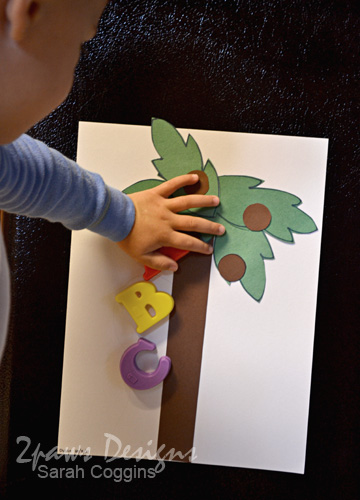 One of the books Dylan received for his birthday this year was Chicka Chicka Boom Boom. He’s been enjoying this book a lot recently – I think partly because he suddenly has more interest in letters. To help encourage this, I thought we could try acting out the book through art & magnets. I saw an idea on Pinterest to create a construction paper coconut tree, tape it to a cookie sheet and then use the magnets. I decided to try the idea but on the front of our fridge instead. I gave Dylan a piece of white construction paper along with pieces of the tree that I had already cut out. He used a glue stick to attach the pieces. I made sure to show him the book cover to help correlate the two. In true two year old style, he insisted that we do the project his way which meant him standing on one of his little chairs at the kitchen counter versus sitting at his table. (And, yes, I can clearly see the scissors I left out on the counter in the background of the last photo. Should have put them up first, however, I was beside him the entire time since I was worried about him falling off that chair and he was quite immersed in the project so they were a non-issue at the time.)

After he finished creating his tree, I added magnets to the top two corners so we could hang it on our fridge. Then we pulled out our alphabet magnets and began acting out the story as we read. The best part was, of course, when all the letters make it to the top of the coconut tree and “Chicka chicka … BOOM! BOOM!” The magnets (all 26 letters plus a few numbers because they are magnets too so Dylan wanted them in the tree as well) went flying across my kitchen floor. Oh, yes, acting out books is a LOT of fun!

This post contains affiliate links and I will be compensated if you make a purchase after clicking on my links.