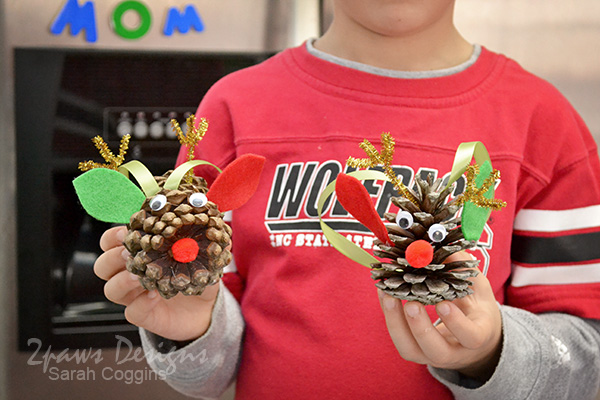 Over the past couple of weeks, my son & I have had fun crafting with nature elements. The idea started after I learned about Nature Pal Exchange through a post on Instagram. The fall exchange was going on and looked like so much fun. We were too late to join in, but I took note of the sign-up timeframe for the Christmas exchange since it time perfectly his track out from school, thus giving us something to do, and included creating a craft. Again, right up our alley.

During a walk one afternoon, we picked up a few items including pinecones from Loblolly pine trees to use for our crafts. I found a number of cute ideas on Pinterest and let him choose what to make. He picked “Rudolph pinecones” and went about making 2 slightly different ornaments using supplies we had on hand – adding ribbons for hanging, felt ears I helped him cut, sparkly pipe cleaner antlers, googly eyes, and red poof noses. They both turned out really cute. For a little more fun, we made salt dough for the first time ever (how have we not done this before??) and made some simple salt dough ornaments using cookie cutters and then pressing a juniper sprig into them. The impressions resembled Christmas trees. Again, he took over this craft too. Once I showed him how to roll the dough thin enough, he was rolling & cutting on his own. He used a straw to make a hole at the top of each. After he had finished making the ornaments, we baked them in the oven for close to 3 hours. We finished them off with simple baker’s twine for hangers and carefully wrapped them in tissue paper to ship to our exchange pals along with the Rudolph pinecone ornaments. This past weekend, the two of us took some one-on-one time and headed over to Umstead State Park for a craft program. When we arrived we learned we would be finding items in the park to create more ornaments! The Park Ranger showed us a couple of examples and took us in search of materials. We found more pinecones and collected a nice assortment of sticks. Upon return to the classroom in the Visitor’s Center, he was able to choose from our finds and create his own ornaments. He made 2 – a large Rudolph made from sticks and a simple pinecone decorated in crayon shavings. He had so much fun he asked to do it again. Looks like we’ll be checking the woods behind our house and our own yard for a few more items to make more ornaments.

Have you made your own ornaments or other crafts using elements from nature before?

Words to Live By