Skip to content
This post may contain affiliate links that help support this site at no additional cost to you.

Before our trip to Disney last November, Trent & I both did a little “research.” We had fun reading up on various little trivia facts about Walt Disney World. One interesting tidbit I came across was to visit Cinderella’s water fountain in the Magic Kingdom; “kneel” before her; and look up to see a crown upon her head. Sounded simple enough. So we went, we looked for Cinderella’s crown and saw – nothing. At the time, it frustrated me a bit but as we went about our week I forgot all about it.

On Friday while reading 101 Things You Never Knew About Walt Disney World, I was reminded again of Cinderella and her crown. The author wrote that the image could only be viewed from the height of a child. Perhaps that is why I missed it? I continued reading the book and really didn’t think much further on the subject. to scrap next. I paused to look at a photo I took of Cinderella’s fountain at night. It’s one of my favorite photos because of the colors & lighting. I’ve looked at it several times. Even scrapped it, but never noticed one little detail until last night – the crown. There it is clear as day. Cinderella’s crown sits directly on her head. Neither Trent nor I made it out while standing directly in front it it. But yet I managed to capture it in a photo.

After this little discovery and the hidden Mickey in the photo on the Test Track layout, I’m starting to take a much closer look at all of our Disney photos to see what other magic we may have inadvertently captured. 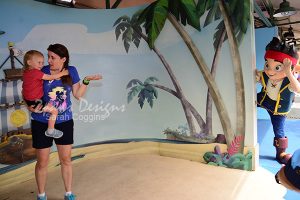 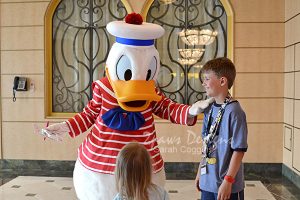