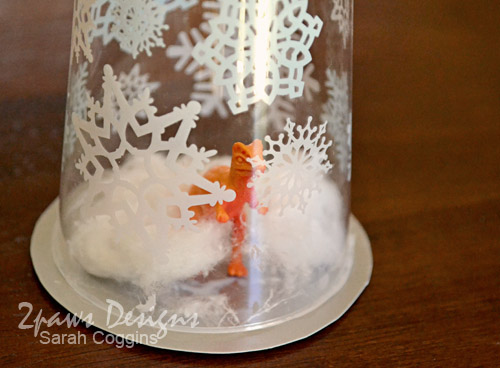 My son had a neighborhood friend over on Monday and, after some time playing in the snow, we came inside for hot cocoa and a little fun. I found an idea for a snow inspired craft over the weekend – a little handmade snow globe ornament. Using supplies I had on hand, we created dinosaur snow globes! The boys were very excited.

I started by pulling out all the supplies and tracing the cup lip onto a small paper plate. I cut just beyond that circle to create the bottom of the globe. I happened to have snowflake plastic cups and silver plates left over from the baby shower in January and used those, but plain clear cups and white paper plates (or cardstock) would work also.

I showed each boy the general idea and gave them their supplies. Truthfully, this took about 3 tries to get both to complete the project in between free play. I quickly discovered the best glue method was for me to squirt a few thin lines around on the interior of our base circle. Then encouraged them to stick their dinosaur toy. Next we pulled apart cotton balls to make smaller “snow” mounds and they stuck snow around the dinosaur’s feet. When they were finished adding snow, I put a thin line of glue around the lip of the cup and placed it over the entire scene. Then set aside to let dry. 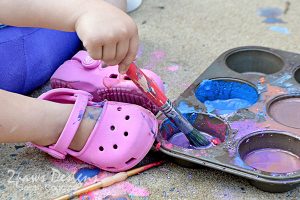