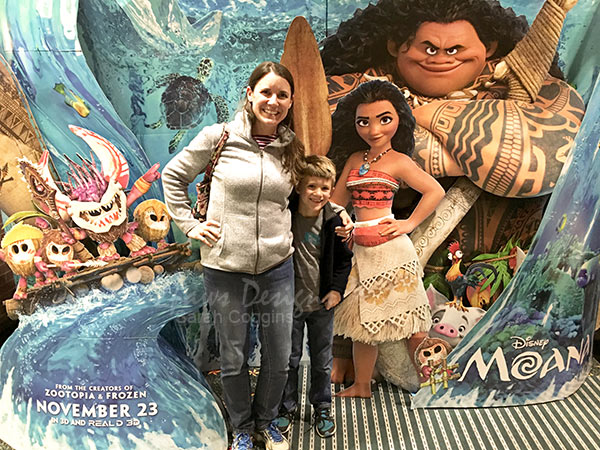 Last Thursday night, I had the opportunity to attend an advanced screening for Disney’s newest movie – Moana. It made for the perfect mother/son date night. Our entire family had attended the Moana event at the Disney Store the week before so we knew the background and were excited about it. Needless to say, I jumped at the chance for the 2 of us to see it early – especially on my birthday. Talk about a lucky win! Normally I am not a 3D movie fan so realizing that’s what I had signed up for made me a little nervous. I don’t know if it’s general vision issues or related to my past experiences with migraines, but I’ve literally felt ick after watching some in the past. Thankfully, this was not the case Thursday night. It’s honestly been YEARS since I’ve seen a movie in 3D so I’m going on the guess that the technology has improved because I left the 3D glasses on the entire movie and was fine. D, on the other hand, took his on and off. I don’t think the 3D portion bothered him so much as the glasses are just awkward to wear especially if you aren’t used to wearing glasses.

The movie itself was pretty great. I loved the animation. Perhaps it’s my love of Disney, but I really feel like their animators do an amazing job on the visual elements, the colors, the details. And, of course, seamlessly sneaking in Easter Eggs (I did catch the turtle at the start and commented to my son how he looked like he was part of Crush’s family in Finding Nemo. I’ll definitely be watching more closely next time to try and catch the others!). Combined with the 3D factor, the film gave you the feeling you were “there” with the characters. I also appreciated that while Moana is the daughter of the chief, she wasn’t your more typical Disney princess. She seemed much more real and relatable in that aspect. Consistent with other Disney movies, there is a “bad guy” and a few dark, scary scenes in the film. My 7 year old scooted closer to me more than once and even hid behind his jacket at one point, but afterwards he told me how much he enjoyed the movie. Overall, I did too minus one strange part. It was enough that I noted it on the studio comment forms after the screening. Without giving away any spoilers, just watch and I’m betting you’ll be able to guess which scene didn’t seem to jive with the rest of the film.

Is Moana on your “to see” list this for Thanksgiving? It opens in theaters on Wednesday.

Thanks again to Erin at A Parenting Production for the passes!

Disclaimer: I did receive a complimentary pass for 2 to attended the advanced screening, but no further compensation. A review or otherwise was not required or requested. All opinions stated within are my own. 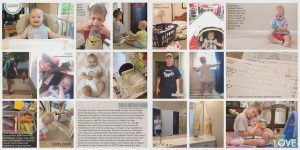 A Name for Baby