The paint was made up of water, cornstarch and food coloring. The recipe I used came from The Imagination Tree blog:

Mix 2 cups of cornstarch and 1 cup of cold water together in a large bowl. Bring 4-1/2 cups of water to a boil. Pour in the boiling water one cup at a time into the cold mixture and stir well. Separate into small containers and add liquid food coloring.

It worked well although it made way too much for us (I tried to keep the leftover to use later but it was a bit gross after a couple of days and resulted in a science experiment – yikes!). So if you’re doing it for a smaller group, I highly recommend making only 1/3-1/2 the recipe. That said, we had a great time.

One of the things Dylan loves about painting is using the brushes. This time it was a finger painting project (the paint was too thick in my opinion to mess with brushes). The texture and lack of brushes seemed to throw him off a bit at first. Lily was quite intrigued by the entire thing. She had a good time squishing it through her fingers and smashing it on the paper. Since I expected this to be messy and the weather was nice, we did our painting outdoors. Dylan sat at his Little Tikes picnic table wearing his art smock. And I put Lily in her Bapron in Dylan’s booster seat behind him in the shade. This gave them each their own space to do their art and still interact. Dylan seemed to have the most fun grabbing more paint and putting it on Lily’s paper for her to spread. The texture began to get to Dylan though – he wanted it off his hands. I set the camera aside and grabbed a piece of paper to give it a shot myself hoping to encourage him a bit more. It worked for a while. Truthfully, I found the texture kind of fun and might just have to make some to play with during their naps one day. 😉 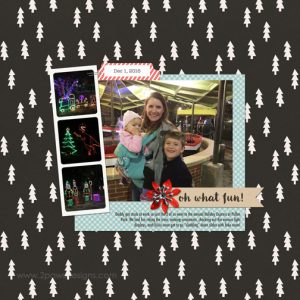