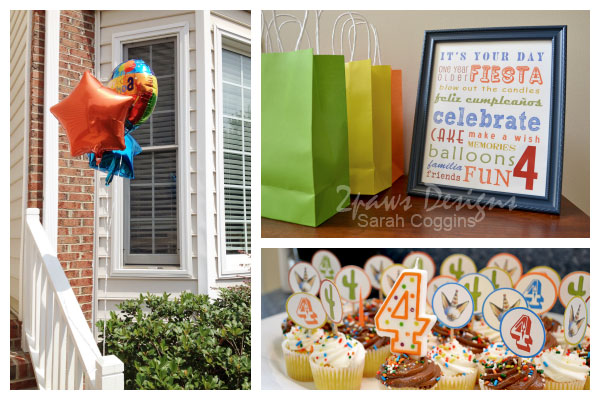 Skippyjon Jones has been a fixture in our house for the last few years. We have almost every book including an autographed copy of Cirque de Ole and a loved plush Skippyjon. So when I came across an idea on Pinterest for a Skippyjon themed birthday party last year, the Four-esta Celebration planning began. I based the party on 2 books from the series – the original Skippyjon Jones and Skippyjon Jones & the Big Bones.

I created the invite in Photoshop using a scan of Skippyjon from Cirque de Ole and, of course, a mix of Spanish words. Skippyjon frequently mixes a bit of real and made up Spanish in conversation during his adventures. We decorated around the house with the Skippyjon books, hanging sewn birthday banner in the kitchen, a couple of sombreros, our son’s dino garden on the kitchen table and a new succulent garden & burlap table runner (I made using an old coffee bag purchased at The Scrap Exchange) in the dining room.

In the backyard, the playset and several soccer balls were ready for play as we lucked out with gorgeous July weather. It was a little humid, but no where near as hot as it had been (or rainy – it’s been a very wet summer!). I had a little surprise waiting for the kids in the sandbox – a “fossil dig.” They each got to take one dinosaur fossil home as part of their goodie bags.

While the idea of a nacho and/or taco bar sounded fun, I decided it wasn’t quite fitting with our 10am party time. Instead we stuck with the successful party food combo we used for the Cars party (minus the cute “Cars”-esque names) – Chicken Minis & fresh fruit from Chickfila, cheese cubes and, the one new idea, popcorn (inspired from Allison’s son’s party in June). A mix of confetti corn from a local popcorn shop and home hot air popped corn.

And, of course we had cupcakes. Mini cupcakes – my “go to” party size for the small crowd. Our son picked out the ‘4’ candle when we were shopping for supplies. I made all of the cupcake toppers in Photoshop, printed, punched & added toothpicks. I had planned to make the mini cupcakes too, but as the party neared I realized I was short on time and needed to let go of a few responsibilities. A few packs of mini cupcakes from the local grocery bakery the day before and we were set.

After the cupcakes settled. We gathered the kids for the piñata. It was hanging high in our two story foyer and gathering lots of attention all morning. From the start of the Four-esta planning, I knew I wanted a bumblebee piñata. In the original book, Skippyjon battles the Great Bumblebeeto as part of his imaginary adventure. He “pops” the Bumblebee and jelly beans come spilling out. It turns out, he accidentally damages his own bumblebee piñata his mother had for his birthday. I did initially looked for one to buy, but struggled to find a look and price I liked. So, instead I got my DIY hat on and made one the old fashioned way – balloon, newspaper, water, flour, tissue paper and pipe cleaners.

I decided I wasn’t too fond of the idea of the four and under crowd swinging a bat in my house so I made it a pull string style. The kids managed to pull all the losing strings before finding the winning one and – oops! – the bit of tape I used to keep the trap door secured while I decorated it stayed shut. They pulled so hard the piñata fell! It was hilarious. Thankfully, the kids were happy to let me pull it open and start shaking out the small bags of jelly beans for them to grab.

I chose small, handled goodie bags this year so each child could pick one, then add their bag of jelly beans and dinosaur fossil. Finding a pack of bags at Michaels with a rainbow of colors that matched our party was pure luck. Inside I had prepped each with a small wooden maraca and a bookmark our son and I made.

The bookmarks started from our son making a watercolor painting. I then trimmed the paper to 8.5×11 and printed the bookmark layout I had created in Photoshop onto the back of the painting. I finished them off with laminating. Each one is completely unique from the next. A simple “book related” gift to tie in with our book themed party.

The final touch, was our son’s birthday shirt. I failed to get a good photo of it the day of the party (or since!) so thanks to my mom for the following photo taken just before the piñata fun started. Wanting to stick with our theme, but do something a little bit different – I created a cactus ‘4’ for his shirt using Eric Carle fabric I had in my stash. All in all, it was a lot of fun! Thanks to all our wonderful friends who joined us in our celebration! Until next July …  🙂 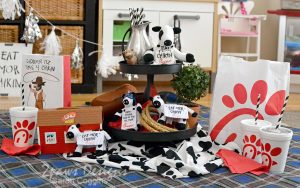 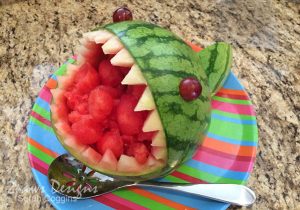