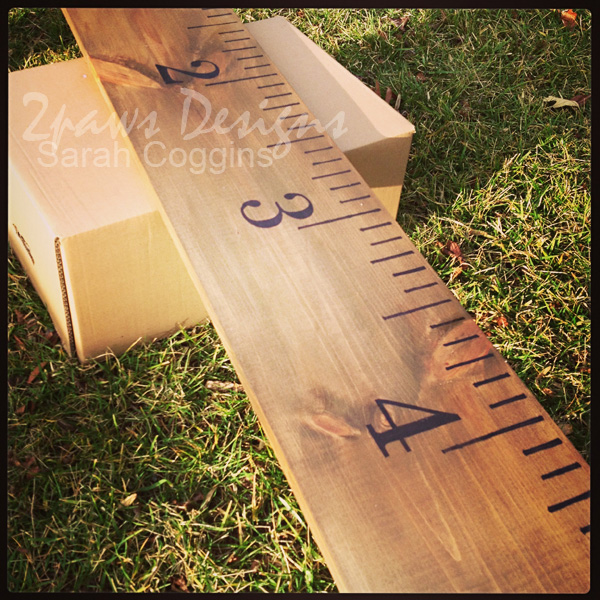 Having left the vinyl giraffe growth chart in our old house, we were in need of a new one. I had eyed a fun oversized ruler style in the PBK catalog well before our move and had it on my future ‘to do’ list. Thanks to help from my friend, Stacey, who rocked some stencil creations with her Silhouette and shopped for the boards, we now have one!

Stacey & I spent a few hours together on a Saturday afternoon while our boys played and husbands watched football. I forgot to take photos, but the idea is pretty straight forward and if you google “giant ruler tutorial” there are plenty of examples.

Basically, after deciding on a stencil for the lines (thickness and lengths) and a font size/style (Century Schoolbook), we used Sharpies to trace and color them in. Next we stained the boards using Minwax American Walnut stain. Having run out of time, we each sealed ours separately later. I used Minwax Polycrylic spray leftover from painting my bedroom furniture.

To hang the ruler, I purchased a pack of keyhole picture hangers. The wood was soft enough that I was easily able to attach the hangers to the back of the board using the included screws without pulling out the drill.

Honestly, the hardest part of this project was choosing the spot to hang it. I finally selected a wall in the playroom that’s also visible when you enter the house through the front door and it has great natural lighting for photos.

After measuring and placing the screws, Trent helped me get it on the wall. Lining it up with both keyholes at once took some effort – I kept hitting one and missing the other. Then he watched the level at the top while I added heavy duty velcro under the bottom. This assured it was straight (I’m a tad OCD like that) and keeps the ruler secure. I don’t want an accidental bump during play to knock it off the wall.

Firmly attached, we’re ready to start measuring just in time for our son’s “half birthday” tomorrow. 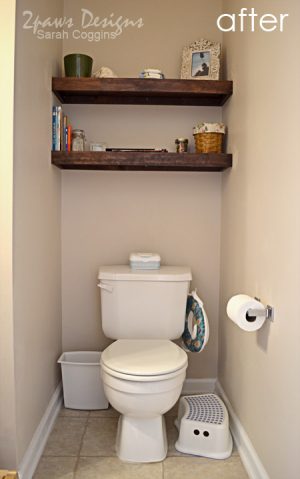