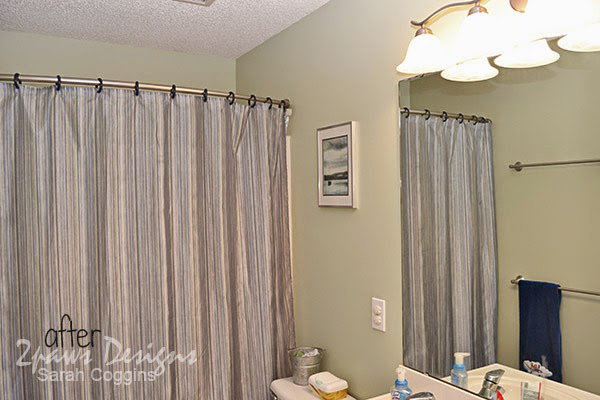 Early nesting? Perhaps. We’ve been slowly working through various DIY projects around this house since we purchased it in September 2012. Now with the baby on the way and my belly growing, we’re kicking it into high gear and trying to knock out a few more things from our lengthy wish list before the fall.

Over the weekend we added fresh mulch to the front flower beds, mowed, replaced the exterior light at the deck, and gave the hall bathroom upstairs a much needed makeover. As with other rooms in this house, the hall bathroom was functional. The walls had been painted prior to us purchasing in Sherwin Williams ‘Kilim Beige’. It’s a nice neutral, but a bit dark for the bathroom and, with a flat finish, every bit of splashed water and soap was leaving stains – similar to our half bath downstairs. The only changes we had made in here prior to this past weekend were replacing the shower head, necessary repairs to the toilet including replacing the seat, and installing a curved shower rod bar.

Here’s a quick look at the before taken with my iPhone literally as we began clearing the room on Saturday in preparation for painting. Okay, but certainly nothing fancy. As we are still using the shower curtain and towels from our old house, I decided to use a similar color I had painted there and liked. I just went a shade darker this time. It’s Benjamin Moore ‘Spring Blossom’. A fresh, light green color.

Dylan helped me and managed to paint everything within his reach. Even climbing our 2-step step ladder (with me behind him) to reach a little higher. Next we removed the old makeup style light fixture and replaced it with a new 4 bulb fixture. Prettier and, honestly, I think it provides better lighting. Certainly not as harsh as those makeup bulbs. We also removed the old towel bar (something else that I never liked when we bought this house) and replaced it with a new, more stylish option times 2. It’s always nice to have extra room to hang towels when we have company so we bought two 24-inch long towel rods and stacked them near the tub/shower for easy reach. My mom has done this in 2 bathrooms in her house and I knew it was an idea I wanted to copy. She even provided me with the heights (67″ and 37-1/2″ above the floor).

The entire process took time on both Saturday and Sunday, but was completely worth it. Even Dylan commented to me how nice it looked now. A quick side-by-side comparison look back and it’s pretty obvious the drastic difference those small changes made. Eventually we will replace the faucets (for now they work so no reason to), update the toilet paper holder & hand towel ring to match the new towel bars, and I would like to frame out the mirror with trim or possibly replace. So expect future updates. It’ll probably just be a while. We have other projects needing attention including the kitchen. Remember that one? We haven’t forgotten. It’s just taking time, but it looks like we finally chose a granite color so progress on that soon! 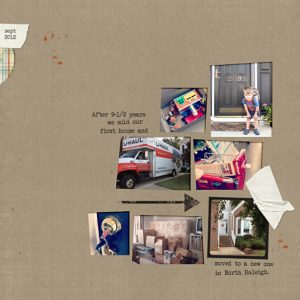