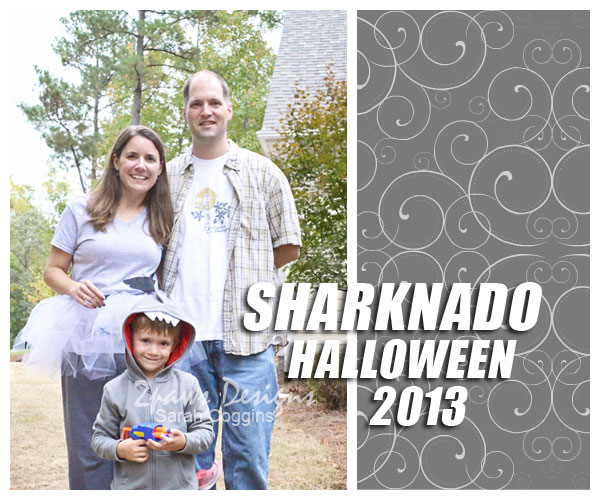 We decided to take a new *spin* on Halloween this year and went for the theme – Sharknado. If you haven’t seen the movie, search it out on a rainy day. It is so bad it’s hilarious. Especially when you get to watch it with friends on your beach vacation. But I digress … this is about Halloween and our costumes.

Once we came up with the theme, we quickly decided Dylan would be a shark. I had planned to make him a costume based on this tutorial from Fiskars, but while looking for a plain gray hoodie at Target, I found a pre-made shark hoodie on sale for under $10. Scratch the DIY at that price. He clearly agreed because he wore it from the moment we found it up to checkout. Trent chose to be the victim. His costume was the easiest with his own clothes plus fake bloody gauze. He tied some around one leg and wrapped his right arm which, we realized after taking a family photo (Dylan didn’t want to participate – repeat of last year? – so we snuck up behind him getting an “individual” shot) was the arm he put around me. Thus it isn’t visible. But, he also unintentionally held his right hand behind his back so in the photo he almost looks like a real victim.

That left one detail – the sharknado. Taking a spin (pun intended) from a costume my friend, Stacey, did last year as part of her family’s spider theme, I quickly made my costume. The shirt I purchased and added a shark graphic using freezer paper and black fabric paint. Then I created a tutu “sharknado” with white & platinum tulle and hot glued in a few mini shark toys. At the last minute, I decided to make Dylan a shark shirt similar to mine. The weather in NC is never really predictable for Halloween. Last year he was snug & warm in his Sulley costume while I had to add a jacket over my Boo costume. This year? It was a tad warm. Assuming he might get hot in his hoodie, I dug out an old gray long sleeve shirt from his closet and added a shark. He was thrilled with the “new” shirt and that it matched mine (note to self: embrace these moments because he won’t find matching mama cool for much longer!).

What are your family’s costumes this year? Happy trick or treating! 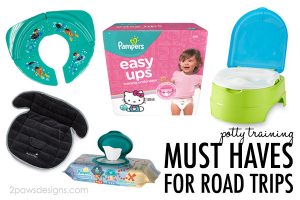 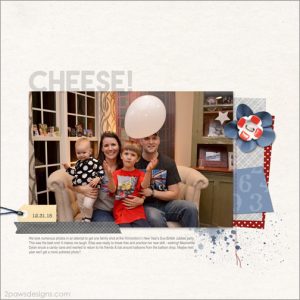