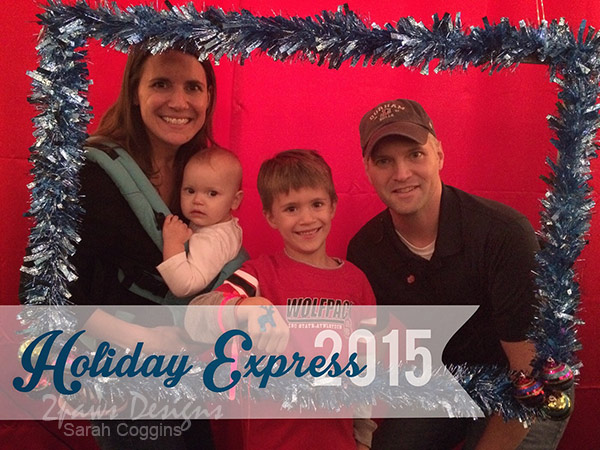 On Friday we attended the Holiday Express event at Pullen Park. This was our 4th year and has become a holiday tradition we all look forward too. Well, at least the 3 of us that know what is going on! This was E’s 2nd time (first with any real awareness), and she really did have fun. Just looked suspicious at times. 😉

She was NOT a fan of Santa and Mrs Claus which didn’t surprise me after our mall experience the previous week. In fact, I kept her strapped to me in her Líllébaby carrier the entire encounter and decided to leave those photos out of the pages for our Christmas album. She did love swinging, people watching, the carousel (I actually unhooked her and held her facing forward in my lap. She waved at her brother on the horse next to us and squealed a bit), and was in awe of the lights on the train ride. I had her forward facing in the carrier for that to ensure she was strapped to me & safe – she had fun trying to break free before the ride began. Exploring a small train and tracks? Probably not the safest toddler adventure. Thank goodness we didn’t have to sit too long before it began.

Meanwhile, my son loved it all. He was an old pro posing with Santa. Was excited to play the various “arcade” games and complete the scavenger hunt to win prizes (candy canes, small top, stickers, glow stick, etc). He rode the sleds over and over and over again twice. First going down repeatedly on his own and then with his buddy, LM, later on. They were hilarious to watch and D only stopped when we had to pull him away for our train time.

Does your family have a favorite special event each holiday season? 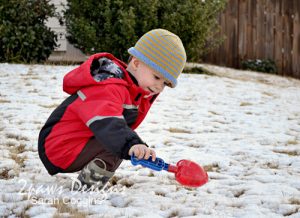 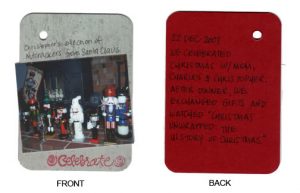 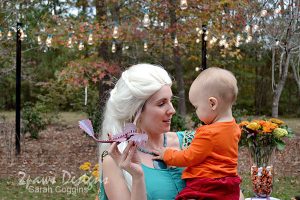