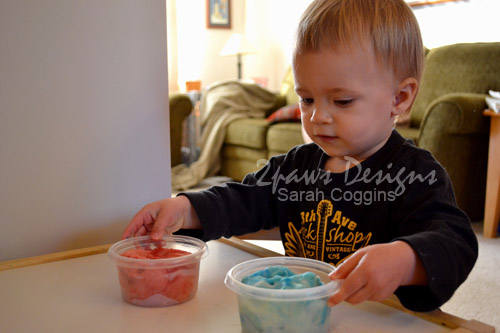 We have been trying to keep occupied indoors as much as possible recently. Even on the sunniest of days since the ice storm, it’s been bitterly cold with a nasty wind. We ventured out yesterday morning for fun with our playgroup, but after naptime needed something to do. I finally got around to one idea that had been on my list all week – making playdough.

I used a recipe from my aunt…

Mix 1 cup of flour, half a cup of salt, 2 teaspoons of cream of tartar, 1 tablespoon of baby oil, and 1 cup of water in a large pot.  Warm over moderate heat, stirring until the mixture sticks together.  Knead after cooling.  Add food coloring and knead again.  Store in an airtight container.  If dry, add more baby oil.

I decided to let my son in on as much of the process as possible (obviously, not the stovetop part) so we started with the pot on the floor.   He helped me dump in the dry ingredients (and I quickly realized it might be a good idea to add a baking sheet under the pan to limit the mess).  Do you see the grin on his face?? Yes, there were a few minutes of happy scooping of flour & salt.  🙂 We added the wet ingredients. He helped me stir. Then, I took it all away to the stovetop. Amazingly, he handled this pretty well. We’re at the point where if he wants something (such as playing with this mixture) and it’s taken away, a tantrum might erupt. Thankfully, this did not happen. I held him up at one point to see what was going on but stated firmly, “hot. No touch.” Which resulted in him blowing in the air [a mimic of us blowing on his hot food to cool it 😉  ]. After the ingredients were finished cooking and had a chance to cool, I pulled out the mixture in full view and carefully kneaded it by hand. Then I brought it down to his level, split the mixture in two, and let him help choose the colors. I added the food coloring and combined it by hand as he watched. Then I gave him his two containers of playdough and told him to take them to his table – which he did (and yes, I enjoyed that little moment of direction following!). And then he wasn’t quite sure what to do next. I plucked a bit from each and showed him how to squish it. This got stares. Interested stares but still a hint of confusion. So I rolled them into balls. Finally, something recognizable … and they were thrown because that’s what you do with balls, of course.  😉 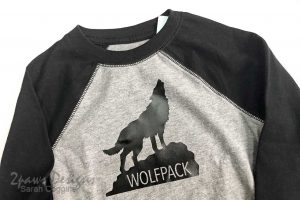