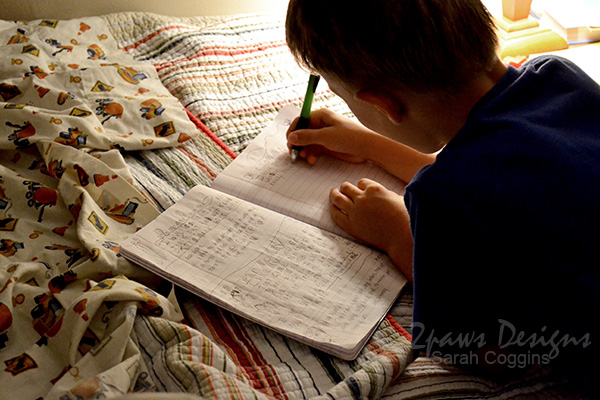 As many creative moments do, I saw an idea on Pinterest about starting a “mother & son” journal. The general idea was to use it over the summer as a way to practice reading & writing plus build up communication. We don’t have a traditional summer due to our year round school schedule, but with his reading & writing taking off as he finished kindergarten at the end of June, it seemed like a good idea to start our own parent and child journal.

We started in mid-July – the day after his 6th birthday and 2 weeks into first grade. I literally grabbed an extra composition book I had in our school supplies stash and told him what it was for. Dylan took two sharpies and carefully wrote out the title alternating colors. We clipped on a simple ink pen and set it on his nightstand. We write to each other most nights, but not all. Sometimes we even doodle in the margins.

I’ve used it as a jumping block for a number of topics from simple praise (“thanks for being so kind and helpful with your sister”) to reminders of how to behave (“remember to make the ‘right’ choices”), but it also helped us with his health in the late July. He had off and on complained about his left ear bothering him. I thought it was *just* swimmer’s ear since his complaints were after swimming and not accompanied with fever and/or issues laying down. We treated it as such and thought all was well. I commented in the journal one night about how I was glad his ear pain was gone. He wrote back that it wasn’t and he was hurting all day. Talk about a heartbreaking parenting moment. Here I had pushed it all aside and went on about my day thinking he’s just fine only to learn he had been in pain. I was thankful I thought to write about it. Thankful he answered me. The next morning we visited the pediatrician and he was diagnosed with a DOUBLE ear infection!

He’s completely healed now and we’ve moved on to less serious topics, but I am very grateful I stumbled across this idea and decided to give it a try. I can see improvements in his handwriting as well as his spelling and grammar skills. And, maybe most importantly, we’ve opened a new line of communication which is always a huge plus in parenting.

Do you have a special tradition with your kid(s)? 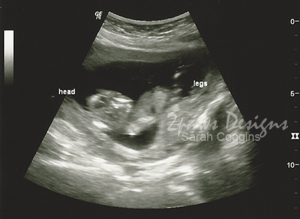 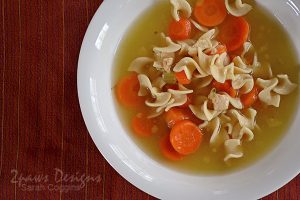 Monday in a Nutshell