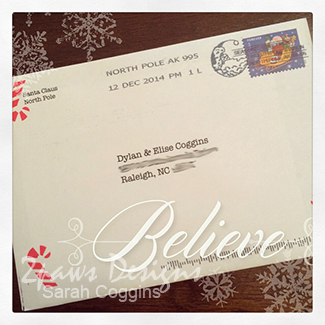 It came this week. THE letter we look for each December. The one from the big guy in red. This year, it came addressed to two little ones in the household and even I got a bit excited when I spotted it sitting in our mailbox amidst a few other holiday cards, a bill or two and a magazine. There is something so magical about seeing this special envelope postmarked the North Pole in our mailbox. I carefully set the envelope onto the kitchen desk. Aside from the other mail. A place where it would be noticed. When Dylan came home and he spotted it, his eyes lit up. Each year this is so fun for me to watch as a parent, but more so this year because he’s learning to read. “North Pole” in the return address caught his eye immediately. Then he noticed the name typed just above: Santa Claus.

As it was addressed to him and Elise, he ran over to where she was sitting in her high chair and carefully removed the letter from the envelope. Then held it up to show her as he began to read it to her. He only managed the first few words before asking me to take over, but my heart just swelled in that moment watching them together and his excitement. As I read the rest of the letter to them both, I glanced at Dylan’s face several times. The excitement was evident in his eyes and huge smile as I read about how Santa enjoyed seeing him and his friends earlier in the month and how proud he was of what a good big brother Dylan had been to Elise. I wish I had a picture of that moment, but it’s definitely ingrained in my memory because that clearly showed part of the magic of Christmas. The magic of childhood and the magic in believing.