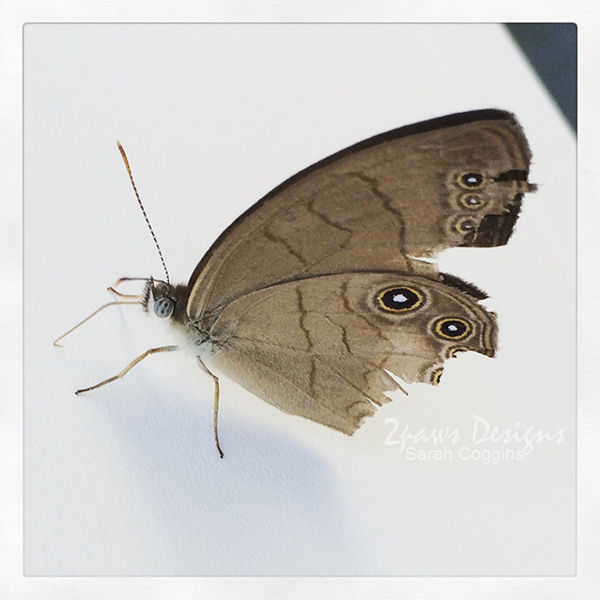 One of our adventures earlier this week was a visit to the Museum of Life + Science in Durham. We spent a couple hours on Wednesday morning searching for clues as we made our way through the new exhibit this month – Curiosity Trail. On the way back into the main building to turn in our completed card, my son spotted a small Appalachian Brown butterfly on the door. Amazingly, it held still long enough for me to get a photo. Even more amazing, I captured it using my iPhone. Normally that wouldn’t be a big feat, but Wednesday was the start of my phone’s demise. Apparently it’s trying to self destruct. From lost photos to crashing apps … well, looks like my hand is being forced to upgrade to a new one even though I had no plans to do so. Like many bit of technology, we never realize how much we use them until they fail. I learned the hard way yesterday I really need to start keeping at least our point & shoot camera handy too. See those cute thumbnails of my son getting his Cub Scout gear? Yep. Lost. Gone. 🙁

My iPhone has apparently decided to self destruct in the worst way possible – by destroying my photos. All blurry and, when opened, turning to gray boxes. 😭 Hoping I can manage to salvage those photos of D getting his Cub Scout gear. Regretting not having a real camera on me today. 💔

On a brighter note, the Appalachian Brown butterfly photo brought us some good luck. I shared it on Wednesday afternoon on Instagram and Facebook as part of the weekly social media contest related to the exhibit and we learned yesterday afternoon that we won this week’s prize. My son and I were both quite excited. We’re also looking forward to visiting again to try the second trail when it opens later in the month. Maybe by then I’ll have a new phone to capture photos with.