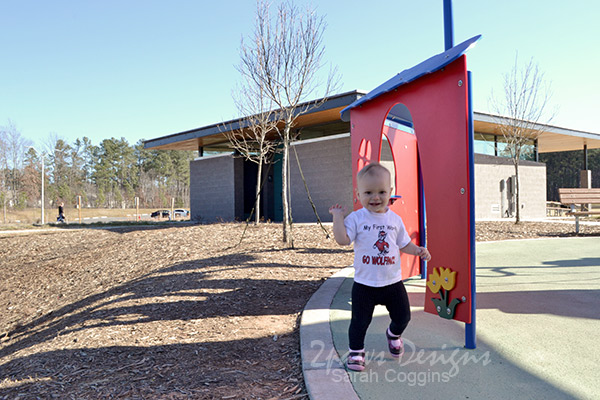 Proof that NC winter weather is a true roller coaster – last week my favorite photo featured Dylan sledding. This week my favorite is of Elise playing at a local playground on a sunny, 70 degree morning in short sleeves! When I saw the forecast on Monday morning, I knew we had to get out and play. We spent most of the day outdoors soaking up the sun and just enjoying. Our morning adventure took us to a new park near our old house. This park just opened last May and we had not gotten around to making a visit yet. We definitely need to go back with the boys sometime. Dylan would love the playground.

Amazingly, we had the entire place to ourselves for the first 20 or so minutes. Elise was thrilled though when a few other kids showed up so she could run around with them and watch what the older ones were doing. She’s also slide obsessed these day so she had to do down it about 30 times – a few head first which had me grimacing slightly except that it was the “toddler” slide and not very high or fast. I was right next to her every second ready just in case.

She also ran through that little “playhouse” door the first time and kept going forward which resulted in a fall and roll down the small mulched hill. One of those moments where I couldn’t move fast enough to keep up with her. Turned out not to matter. She was startled, then began laughing and tried to do it again! My crazy little wild child.

Thankfully, I quickly convinced her (how I have no idea!) to turn and stay on the playground surface. She started running through the doorway and circling back to do it over and over. This is how the photo above came to be. I took a number of shots as she went around again and again. She’s a tad blurry because she was moving so fast, but I love that I caught her grinning & waving at me. Also, the shot is full manual. I was practicing during our visit. Trying to get more confident in my camera skills.

Do you have a favorite park or playground?

Linking up with Photo Friday.

If you are in the Triangle area and want more details about Church Street Park, check out my post on it at Mom in Chapel Hill. 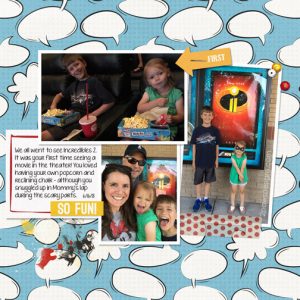