Prior to our purchase of this house, it went through several years of renters and neglect. Part of this resulted in the kitchen appliances being in sad shape to put it mildly. The refrigerator we replaced immediately as it was full of spills and mold – the nasty fuzzy type and a LOT of it. I wish that was an exaggeration. A few months later, we replaced the dishwasher. Most of the prongs in the existing one were rusted and started staining our white dishes.

The oven was in a bit better condition. It looks worn and clearly has been. The handle nearly fell completely off shortly after we moved in. I found and ordered a replacement part which allowed me to repair it for very little cost. A plus as, at the time, we had planned to purchase a new washer & dryer when we moved but suddenly were also buying a new refrigerator and dishwasher. We really didn’t want to spend the money on another appliance. Two years later, the oven is still working (and still without a functioning light but that’s more my laziness for not replacing the bulb) so we’re still using it. Although I look forward to the day we replace it!

We did finally decide to replace the microwave. Like the oven, it was still functioning so we were planning to wait until it quit. However, as we’ve started making plans to complete the backsplash, we knew we needed to go ahead and replace the microwave as sizes can vary and we want to be sure we tile to the right height. Plus all those current “up to 40%” appliance sales happening got our attention. During a recent trip to Lowe’s, we decided to take a look at the options and prices. We narrowed it down to 2 by Whirlpool to match our other appliances and spoke with the department manager while trying to make a decision. I had noticed that there were a lot of appliances in the clearance section and commented to Trent that we should take a look there too. The manager then offered up that if we found something we liked, to make an offer (i.e., he could go lower). I had no idea! Needless to say, we made an offer and he accepted. I almost didn’t believe it was true until the cashier rang it up at the reduced price without question.

Now, quick tip on buying a clearance appliance – double check that all parts are included before buying. A lot of the appliances in that section were either floor models or had dents in them. In our case, we found one of the two models we had been considering and it was simply an open box item. Talking to the department manager, we learned it was taken for an install but was the wrong model so it was returned to the store. What we didn’t realize until we got home was it was missing some hardware and the under cabinet mounting template had been trimmed for use. Neither of these were a big deal. Trent figured out how to place the template and use it even though it wasn’t complete; and we were able to reuse the hardware from our old microwave to complete the installation. All in all we’re pleased with our purchase. The new microwave not only looks a lot nicer, but it functions so much better too! And I’ll be stalking the clearance section on future visits for a new oven. In the meantime, we’re saving up for the tile to complete the backsplash.

Do you have any appliance buying tips? 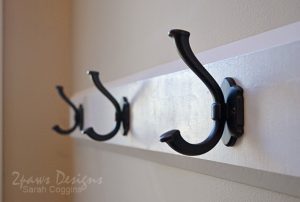 Get Hung Up on a Custom Coat Rack 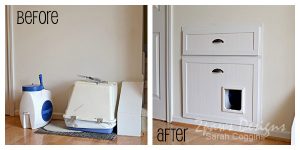