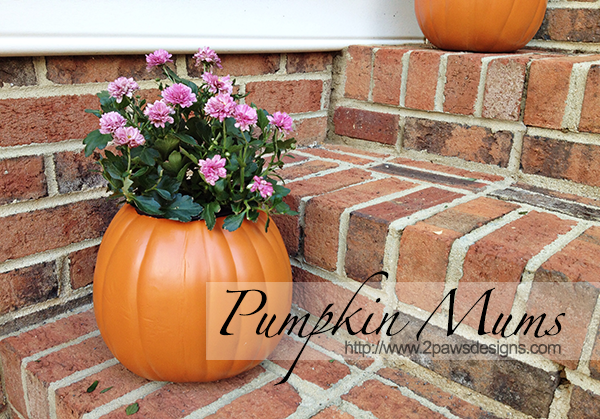 Fall is my favorite season. And yesterday, I started decorating my house. One of the first things I did last year was add mums up the steps to the front door. Having just moved and with a lot on my plate, I literally just plopped the flowers (thin plastic ‘pot’ and all) onto the steps and called it done. This year, I’m making a little more effort. While I could (and probably should for year round decorating) invest in a few nice pots to line the steps, I decided to take a fall twist and use pumpkins for pots. Fake pumpkins. I don’t trust real ones to hold up all season and we’ve had great luck with a carved fake pumpkin for years. It still looks great. So now I’m testing how well they survive the elements + a live flowering plant.

How to make your own? Easy! All you need are 5 supplies – fake pumpkin, mum plant, marker, knife & a drill.

Start by marking the top of your pumpkin for where you will cut. I just held the plant over and loosely traced with an orange Sharpie. My thought was the orange would blend in better if the lines ended up showing a bit. Instead, my initial hole was a bit too small so I just kept trimming out slowly until the plant just barely slid in. I wanted a snug fit.

Then (no pictures of this step) I used our drill to make a couple of small holes in the bottom to allow for drainage.Add the flowers to the faux pumpkin, place and enjoy!I bought my pumpkins on sale at Michaels and my mums on clearance at Lowes so the entire project cost me under $25 for 3 Pumpkin Mums. I’ll update later in the season with how they are holding up. Hopefully, I’ll be able to refill these same pumpkins year after year. Happy Fall!

Update: The pumpkins held up great and are stored in our garage for use again next fall! 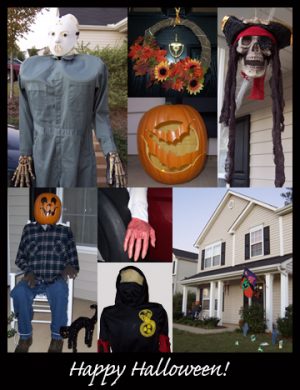