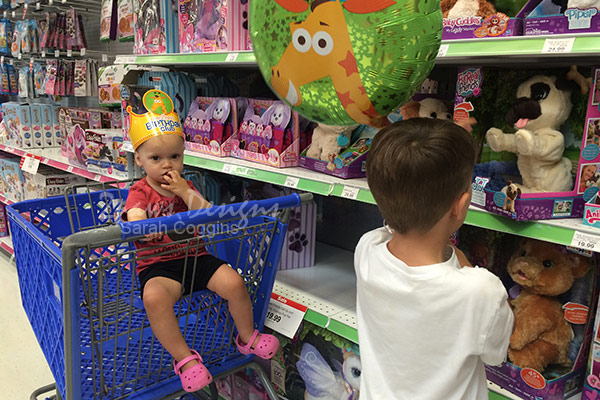 I’ve had mixed emotions since learning of the closing of Toys ‘R Us. It wasn’t a big part of my childhood. I grew up in a small town. Our toy store adventures were at KB Toys at a mall in another city. I later worked part time during high school at KB’s larger store, Toy Works, when it opened in my hometown. But Toys ‘R Us, and the catchy jingle were always there, and the store became a bigger part of my life when I became a parent myself. Shortly after we learned we were expecting a baby boy in 2009, Trent & I headed to the closest Babies ‘R Us to look at baby items and think about a registry. That didn’t quite happen. Instead we ended up with scanner in hand and spent close to 2 hours carefully mulling over assorted, “needed” items (along with numerous adorable items like tiny Nike sneakers) and deciding which ones we should add to our registry. By the time we left, our registry was complete. Many visits followed including one where I had him pull down crib mattresses from their shelf as I tested each one with my very pregnant self trying to choose the perfect one for our baby to be. I can only imagine now how hilarious that must have looked, but thankfully, the staff let us be.

One of our last “pre-baby” adventures was a trip to Babies ‘R Us when I was 9 days past my due date. We knew if nothing else, an induction would occur a few days later. I insisted we make one final visit to purchase a breathable bumper for the crib. Little did I realize this would be our last shopping trip as 2. Later that night I went into labor and by dinner time the next day, our newest precious family member had arrived.

I signed our son up for Geoffrey’s Birthday Club when he was an infant. Starting with his first birthday, both of my kids have received a card and coupons each year. One year our son received a coupon for a free Chuggington train car. He was so excited about this special gift and took time deciding which car to get. We still have that car in our train set. More common though was a coupon for a simple set dollar amount ($3 for example) – like a little gift card. We’d take him to our closest Toys ‘R Us with his coupon and birthday money to choose a toy or two (depending how careful he was with his money). I’ll confess, there were times I questioned my sanity in taking our kids to a giant toy store where my son would carefully select a toy. Then suddenly see something else. Rethink his decision. Put back the first toy, grab the second, and, as we headed for the register something else would catch his eye. The cycle would repeat. And repeat. And repeat. It often felt like we spent hours there (most likely only one) waiting for him to make the perfect choice.

Yet we went each year for his birthday and later carried on the tradition once his sister arrived. He loved being the big helper on those visits – assisting her in finding the perfect gift. Aside from picking out a special item, both loved getting the free birthday crown and mylar balloon. The balloon was always great quality and lasted forever. To the point I would plot it’s demise because I was tired of finding it in the house weeks later! Even during a time a few years ago when helium was suddenly more challenging to get and our local Harris Teeter quit giving out balloons to kids during visits, Toys ‘R Us still gave free balloons to kids celebrating their birthdays. It was simple joy that made their day.

Next month we’ll celebrate our son’s 9th birthday. There won’t be a card from Geoffrey in the mail or a special shopping trip at Toys ‘R Us. While I’m sure we’ll come up with new adventures, I will miss this tradition. Thanks for the memories, Toys ‘R Us!