I sat frozen. Unable to move and hardly able to even breathe. My heart raced as I tried to calm my mind.

Ninety minutes that seemed like an eternity slowly ticked past. I know because I kept looking at the clock. Then the door.

The clock. Then the door.

This was exactly 4 months ago on October 18, 2014 in the wee hours of the morning. Elise was less than 24 hours old. We were still in the hospital. She had been sleeping peacefully for almost 4 hours and, while I was more relaxed being the second time around and do agree with the general “don’t wake a sleeping baby,” I started to wake her anyhow knowing the nurses would come around to check on us and see when she last nursed. I knew once home we could adjust to our own schedule. But in the confines of that room, you fall under the “rules” so better to wake the sleeping newborn and at least show you attempted to nurse them.

I had just gotten us settled into my hospital bed with pillows fluffed all around trying to get us as comfortable as possible when one of the techs came in to check us on. The quick check of were we okay, glance over the nursing/diapering log, and how was my pain level. Nothing fancy. The tech started making notes on her clipboard when she stopped and stared at the two of us for a split second.

The next few seconds flashed by my eyes as she commented something about Elise choking. Grabbing her from my arms. Flipping her onto her belly and patting her back. I remember her saying that Elise was turning colors and running out of the room with Elise in her arms while yelling for a second nurse to grab the infant cart and follow her.

My blood ran cold as fear ripped through me.

I can barely remember yelling at Trent who was just as exhausted and stunned as I was to chase after them and find out if our baby was okay.

I was sore and in pain from delivery as well as literally frozen with fear.

I sat like that for 90 minutes. My mind running a thousand miles an hour thinking and yet not thinking. I was terrified and afraid of thinking the worst. Because I know.

I know it can happen.

Throughout my pregnancy a dark cloud was over every moment. It eased a bit in the end, but due to the miscarriages I suffered before this pregnancy, it never fully went away. I knew that just because we reached the finish line didn’t mean getting the prize.

I knew because my kids have a cousin that was due in August 2013, the same month I was due with my first miscarried baby, and that little girl arrived stillborn in July 2013.

I knew because one of my cousins was due with a son in October 2014. He arrived early and then was called home to Heaven a short time later.

I knew it didn’t have to be the same story for us. But it could. And that was my greatest fear in those long 90 minutes.

Even when Trent returned soon after Elise was taken away from us to tell me she was okay and was being kept in the nursery for a while for observation.

Even after one of the nurses came to tell me the same.

I sat frozen in that hospital bed for the full 90 minutes. Unable to hardly move beyond breathing until she was returned to our room. At which point I grabbed our little girl and embraced her tightly and held on for as long as possible. Yesterday we celebrated 4 months. Four months of this beautiful girl in our lives and I feel so blessed. So if you catch me holding, hugging, snuggling and covering in kisses either one of my kids “too much” – there is no such thing. Grateful I am able to do just that. Life is a beautiful fragile thing and somehow I’ve been blessed with two beautiful children to love. I don’t take that lightly. 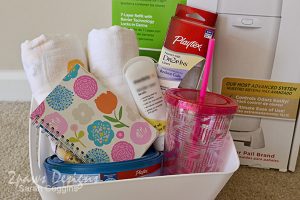 Must Have Gift Basket for New Moms