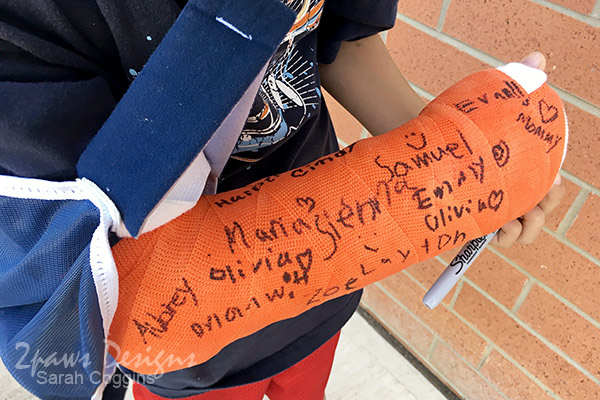 In mid-September, a moment of “Mom, watch this!” turned into a long night at the emergency room after our son jumped off a swing and landed on his arm instead of his feet. The next 5 weeks he spent with his arm in a cast and restricted activity. It had been many, many years since my last cast which meant we all learned a few things to make life a bit easier. Following are our tips for surviving a cast.

Splurge on a Few Larger Shirts

I use the term “splurge” loosely. Our son’s first 2 casts were rather large and went over his elbow making it difficult to pull his shirts over it – and the weather was still warm so we were just trying to get short sleeve shirts on.

The first weekend he wore a couple of my t-shirts. I didn’t think he really wanted to wear those to school though and, as luck would have it, that weekend was the end of a consignment sale. I scored 6 larger boys’ t-shirts for about $4. A consignment store or thrift store would be equally handy. While I did find some that he might wear again in a year or two, if these never get worn again, they were worth the expense. They made life easier and him more self reliant during those first few weeks.

A cast is with you for a couple of weeks so you might as well have some fun and express yourself a bit. Since my son ended up with two “permanent” casts (he received a temporary one in the emergency room initially to allow for swelling), he selected 2 different colors.

One of the fun things about having a cast (at least for kids) is getting all of their friends’ autographs. A retractable Sharpie is an easy option to carry and eliminates fumbling with a marker cap. We clipped one onto my son’s sling so he had it ready easily when the opportunity arose.

Along with surviving a cast come surviving the itch. I’m not sure it’s possible to fully prevent at least a bit of itchy skin beneath the cast. It actually seemed worse with his second cast. The orthopedist office recommended Benadryl which we did use one evening just before bedtime. It’s obviously not the preferred option during the day – especially on school days.

The couple of other times my son complained, I tried an idea I found in online message boards – baking soda. I shook a tiny bit into the top of the cast around his hand. Then, he wiggled his fingers and hand as best he could to shift it downward.

My son had his arm casted for 5 weeks. For the first 3 weeks, the cast extended over his fingers slightly which made washing them tricky when we were trying to keep the cast dry. Instead, I used baby wipes a couple times a day to gently clean his fingers. It was much easier.

For bath time, we used umbrella bags to cover his hand and cast completely. I grabbed a few as we were leaving our grocery store the day after he broke his arm. This tip shared by another parent was a huge help. We put one on each time he bathed and secured it with washi tape. The tape easily peeled off afterward so we could reuse the same bag multiple times. (Note: he took baths and kept his arm out of the water just to be safe. I would not trust washi tape to hold a bag closed in the shower. A cast cover would be a better option.)

From pain management and elevation in the first couple of days following a break, to how long you should refrain from physical activity after cast removal – listening to your doctor and following orders is the best way to make sure the break heals completely.

Have you or your kids had a broken bone? What tips for surviving a cast would you add to these? 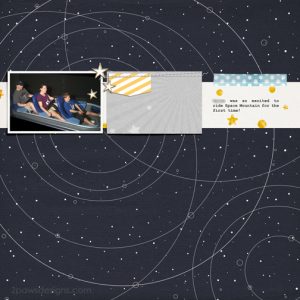