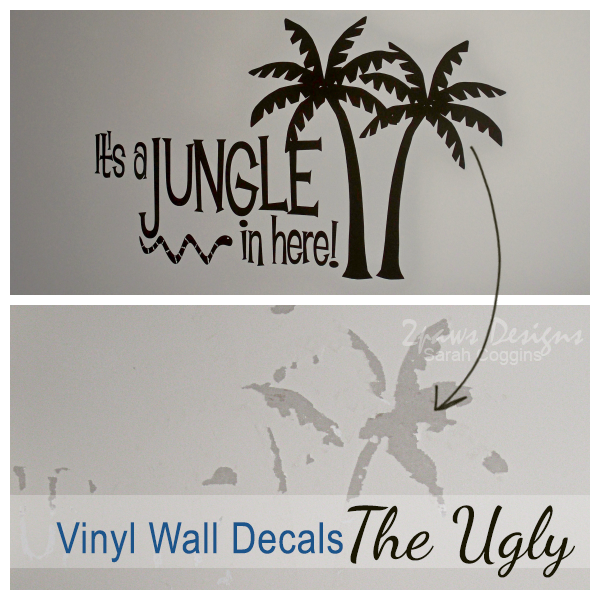 Vinyl wall decals have become an “in” thing.  They are relatively inexpensive.  Easy to install.  Come in as many designs and colors as you can imagine.  I fell for an adorable giraffe growth chart one for my son’s nursery when I was pregnant.  I finally decided to order it and a word/image combo “It’s a Jungle In Here” for over his crib.  I liked the cuteness and fun to both of the designs.

I was thrilled when the package arrived.  Trent and I carefully placed them (I wanted to be sure the “60” on the growth chart was actually at 60 inches and not 59).  I admired them.  They looked so cute and got rave reviews from everyone who saw them.

Then I decided to move our son into another room.  The giraffe I was planning to leave as is.  The Jungle decal unfortunately was in the way of shelving I would be hanging over our computer desk so it needed to come down. The company I bought the vinyl decals from is Single Stone Studios.  It had a wonderful reputation on Etsy and was featured in several magazines.  The Etsy shop where I placed my order and the company website both proclaim how the decals won’t damage your walls:

Q: How do I get the decals off when I’m ready to redecorate? Will they damage my walls? A: To remove the decals, start at a corner and simply peel them away. They will come off easily and will not damage your walls or leave any residue. Landlords love us!

This is one of the reasons I was excited about the decals in the first place.  I knew they wouldn’t be permanent.  Whether we changed furniture layout, changed rooms or even when we moved someday – they would come down.  Little did I realize they would not remove cleanly.  Perhaps they do in some situations.  But, no, not for me.  As I slowly peeled back the letters, up came paint and even the top layer of gypsum wallboard in some spots.  The walls aren’t ruined, but they will need patching and repainting.  So much for the promise to “not damage your walls.” Honestly, I feel like I should have known better. It seemed too good to be true. I emailed Single Stone Studios in late June.  As of the beginning of this week, I still didn’t have a response. I forwarded the original email and tried again. This time I received a brief apology saying this had never happened before and offering suggestion to try a hair dryer when I remove the rest. I’ll definitely try and see what happens because, while the “Jungle” text was small, I’m honestly quite concerned about the damage the giraffe decal will do as it covers far more wall space.

My final two cents isn’t to avoid vinyl wall decals altogether, but buyer beware. As for me, there will be no more applied directly to my walls. One was headache enough. I tried using a hair dryer to warm the palm tree portion of the “Jungle” vinyl decal and it only made the situation worse: Honestly, the entire area is a mess. Where the vinyl did remove cleanly, it left behind the adhesive residue. Trent & I have agreed to leave the giraffe as is for now. I’m leaning toward hiring someone to remove it and repair the wall when the time comes. The “Jungle” decal damaged approximately 2 square feet of wall … the giraffe one covers about 10 square feet … aye yi yi. 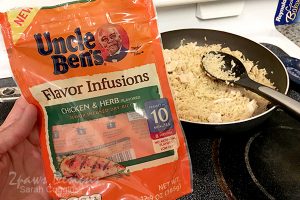